This just in from Nose:

The long-smoldering issue of overly-alcoholic wines is about to ignite – and so should you, especially if you’re a wine-making enabler of amped cabernets, or a wine critic whose reputation is based upon hyped and fruity, fist-in-the-face reds.

The resistance comes from the producers, instead, of more classically structured contenders who prize balance, some tannin, and some reins on fruit. Nowadays those wines can’t be properly appreciated by palettes habitually staggered by 15 percent and up alcohol. If wine lives by the ratings, then those with subtlety and finesse deserve to have their charms appraised before the high-octane bruisers climb through the ropes and start beating on the tongues of the critics. In short, they should be tasted first, as a matter of principle, and sound judgment.

But deserving isn’t enough, in large part because the reputation of so many California wines – including many of those Napa cabernets so recently auctioned for small fortunes – rests as much on alcohol as on fruit. Altering the way these wines are evaluated would strike at their bona fides, and price points, so change is savagely resisted by wine-makers and so many dependent, scribbling appraisers.

But not, it seems, Robert Parker’s replacement as California’s supreme taster, who has a more classic palette – dare one say better? - than his boss, and is elevating the rankings of some long-neglected cabs. He’s said to also be systematically down-grading some tres cher vinous stars, as well. Complimenti, Antonio.

All of which amounts to a tempest in a demijohn without some kind of public relations crisis to make everyone pay attention to the generally out-of-balance rating system. Which crisis, Nose can confidently report, is already on rails.

Posted by Jim Conaway at 9:20 PM No comments: Links to this post 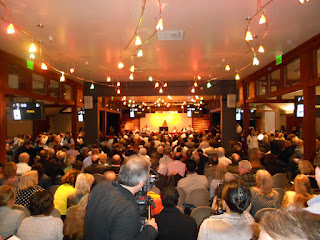 The Premier Napa Valley trade wine auction raised more than $ 3 mil, a new record and a further indication of the ingeniousness of the concept and the durability of NV prices (and parties). But there's a tremor detectable, and this year it could goose the Richter.
Stay logged...
Posted by Jim Conaway at 7:13 PM No comments: Links to this post

Premier Napa Valley, the big auction of small-lot wines made exclusively for the trade, has just concluded, raising even more money even than last year (more about this later). But over the weekend I spent time tasting at wineries the latest releases of cabernets, and can report a subtle shift from alcoholic fruit-bombs to classically structured wines that take some time to open in the glass but are round and powerful and well suited for dining. Among the ‘09s I found most impressive were Chappellet, Continuum, Frank, Swanson, Flowers, Krupp Brothers, David Arthur, Silverado, Joseph Phelps, and St. Supery. These are not inexpensive wines, but there are others as or more expensive that inundate the palette with high-octane fruit, ripened to near-tumescence, and blow away food as well as appetite.

And anyone needing the know what’s going on in Napa Valley at any particular moment should subscribe to Paul Franson’s Napa Life (www.napalife.com), the omnium gatherum of all things relevant culturally, as well as viti-culturally.

Posted by Jim Conaway at 5:52 PM No comments: Links to this post

Tasting two young cabernets with friends recently, one wine from Napa Valley and the other from Virginia, was both fun and instructive. Primarily we realized – again - that American wines produced outside sunny, temperate California will have trouble matching the marvelous, up-front fruit, but also that the stretch of Virginia piedmont between Middleburg and Charlottesville has come into its own (http://gardenandgun.com/article/virginia-wine) and is now producing some really fine wine that has more in common with the Medoc than Napa. The ’07 Volker Eisele Estate from Chiles Valley, in the mountains east of the Napa River, is one of the best deals around for medium-priced, top-notch, classically structured cab. The other wine, the ‘08 RdV – for Rutger de Vink, the vintner – from the environs of the hamlet Delaplane, in Virginia's Fauquier County, also had good structure and was more deeply hued, with remarkable body. But the Eisele, lighter in color, brighter on the palate, was more inviting at the outset than the RdV, whose characteristic black cherry quality was masked. This was my fault, not the wine’s, which had ridden around in the back seat of my car all day, and I had failed to let it rest before opening and hadn’t decanted it. However, the longer the RdV stayed in the glass, the better it got, showing that it had more in common with the wines of Bordeaux than those of NoCal. Finally both wines, though not at all the same, showed the power and grace of fine cabernet that suited the venison we ate with them but would have gone down smoothly - and has on other occasions - with most anything from grilled vegetables to dark chocolate.

My peripatetic correspondent who uses the simple handle, Nose, says new money coming into Napa Valley these days is not just big, and new, but also “dumb.” As in clueless: starting wineries to sell high-end cabernet when there’s already a lot of that – no one uses the g-word here (glut), and picking brash names and marketing strategies more suitable to lingerie and cowboy boots. And, on a more serious note, that LAFCO, the California agency that determines how much land in each county can be incorporated by the cities in that county, is being pressured here by responsible land users to put a moratorium on the gobbling up of productive agricultural land. Unfortunately some local officials are opposing the move. You’re asking why, naturally. Because limits on development also put limits on the power of certain county and state bureaucrats, who are more interested in that than in land conservation. And this in what is surely the most successful county anywhere in terms of revenue from a legitimate crop, vitis vinifera, and where ag land should be protected at any cost.

Posted by Jim Conaway at 11:57 AM No comments: Links to this post

Here are some memories from an earlier visit to Napa, starting one fine Sunday with Sunday jazz on the street in Berkeley, listening to stand-up bassist Brandon Essex play with a group that included an old friend, Vince Wallace, famous sax player in the Bay Area going back to the Sixties. This was followed by a glass of sauvignon blanc at The Wine Jar in San Francisco’s Fillmore (and more jazz) and then dinner at SPQR, highly imaginative Italian/NoCal: fried pigs' ears, quail stuffed with faro, and tiramisu that arrived as a kind of pancake riding on sweet cream and chocolate over which was poured a shot of espresso. Also very expensive glasses of Barbaresco and sangiovese. On the way detour to the Point Reyes lighthouse, beautiful Scotland-esque moors with the Pacific Ocean thrown in, stopping for Drake's Bay oysters sucked off the half-shell at old picnic tables looking over the water. That night in Napa friends Lori and Randy Dunn who loaded us into a jeep and drove us an hour straight up into wilderness, now sucking on Morgan chardonnay, and subsequently Spottswoode’s impressive cabernet sauvignon and Dunn’s unparalleled Howel Mountain cab with steak while sitting on top of a ridge overlooking forty miles of Napa Valley, the last of the sun bouncing off the ridge. We went down an even steeper track in the dark, cutting branches with big shears to get by, looking for mountain lions, and finished off with a (modest) palate cleanser of tequila (Ocho, Randy's latest find) and finally tooling very carefully down to St. Helena.
Posted by Jim Conaway at 9:51 AM No comments: Links to this post

Nose is off to the premier Napa Valley wine auction held not for Hollywood and Silicon Valley swells but for the trade. Here the real hash gets slung and the best wines - particularly cabernets - get aired straight from the barrel. Nose will be there.
Sniff... sniff
Posted by Jim Conaway at 7:20 AM 1 comment: Links to this post