Take another look at this

Important to remember where the "defeat" came from 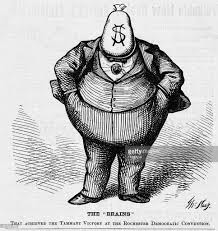 A reader sent the following letter to me and to the Napa Register:


Follow the Money
Can we be really clear on who is bank rolling the “No on C” campaign?
The “No on C” flier that was delivered to thousands of households through-out Napa County a few days ago was paid for by “No on Measure C, Coalition for Sustainable Agriculture – FPPC I.D. #1401241.” It is listed as a “Campaign Finance Committee” on the CA Secretary of State’s website. There are no names listed in association with the committee, but there is a phone number: (707)258-8668. This is the phone number of Michelle Benvenuto and the Wine Growers of Napa County.
That’s not really much of a surprise.  But what is interesting is that after digging a little more, I found  the actual mission statement(https://www.guidestar.org/profile/68-0398209) of the Wine Growers of Napa County,  as filed with the IRS when it received its tax exempt status in 1998:
A NONPROFIT ASSOCIATION WHOSE PRINCIPAL MISSION IS TO PROMOTE AND PRESERVE SUSTAINABLE AGRICULTURE AS THE HIGHEST AND BEST USE OF THE NATURAL RESOURCES OF NAPA COUNTY IN TANDEM WITH THE PROTECTION OF WINERIES AND THEIR ABILITY TO PRODUCE AND MARKET WINE.
Please note the last part: “the protection of wineries and their ability to produce and market wine,” because that part of their mission statement is often left off of any more recent descriptions of the organization.
This is the description of the organization as listed on their IRS on Form 990 in 2014, 2015, and 2016 (all public records):
“To promote and defend grape growing and wine making as commercial enterprises in Napa County.”
That’s pretty specific.
There is no website for the Wine Growers of Napa County, though they belong to both the Napa and St. Helena Chambers of Commerce. However, you can read much more about this organization in James Conaway’s book, “The Far Side of Eden, New Money, Old Land, and the Battle for Napa Valley.”   Here is a short excerpt from page 183:
“Consider the state of the valley, advise, bankroll, and wield a big stick, that would be the role of the new Wine Growers of Napa County--”
If you dig a little more through public records you can find this: the president of the Wine Growers of Napa County as of December, 2016 was Chris Indelicato, who is also the president and CEO of Delicato Family Vineyards, which, according to an article that appeared in Napa Register, June 15, 2017 (“Delicato’s growing presence in the wine industry—and Napa Valley”) is the seventh largest wine company in America and the second largest wine company that has headquarters in Napa.
Other “officers, trustees, and key employees” in the public record of Wine Growers of Napa Valley include Michelle Benvenuto, Dave Pina, Tony Leblanc, Rob Mondavi, Mike Reynolds, & Carolyn Wasem.
The most troubling thing about all of this is how much money the No on C coalition (whose phone number is shared by the Wine Growers of Napa County) is spending and how many dirty political tricks they are playing to try to convince the voters that Measure C, if passed, will do the very things most residents in Napa County are worried about most:  increasing traffic and the number of mega-mansions, tasting rooms, and event centers, especially when you consider that the original mission statement of the Wine Growers of Napa County is “to protect wineries and their ability to produce and market wine.”
Do you really believe that the Wine Growers of Napa County will still be telling the voters that more event centers will lead to more traffic after this election?  Or do you think they’re doing their best to confuse and mislead you into voting against your best interest?
Make no mistake, the No on C effort appears to be bank-rolled by some very big money and big winery interests who have hired professional political operatives that are pulling out every dirty trick in the book, including push polls, a failed attempt to deceive the voters at the tax-payers expense, misleading billboards, and the very flawed and misleading mailers that went out last week. They are, just as James Conaway wrote, wielding a very “big stick,” in this case, money, influence, and intimidation.
Do you really trust them to tell you how to vote?
Do you really think they have your best interests at heart?
If you want to do a little digging on your own, ask your mayor or supervisor if they accepted any campaign contributions from the Wine Growers of Napa Valley.
Follow the money.
Please, don’t be fooled or confused by the dirty tricks. Vote Yes on Measure C.  It’s about protecting the watershed for the benefit of everyone that lives in Napa County.

Name withheld by request.
Posted by Jim Conaway at 3:47 PM No comments: Links to this post

They care in San Francisco

James Conaway | Photo: Bob McClenahan | August 22, 2018
After the narrow defeat of a contentious ballot measure to limit new vineyards, defenders of Napa’s past take stock of its future.

It’s high summer in Napa Valley, and those of us who forgot to bring a hat regret it. We’re standing on the edge of Deer Park Road, on the east side of the valley, almost directly across from the town of St. Helena and out of sight of most wine country tourists, looking up at acres of tumbled rock on 1,683-foot Howell Mountain. Our little group includes a community activist named Kellie Anderson, who belongs to Save Rural Angwin (Angwin being the town of about 3,000 located a thousand feet above us); Napa County’s somber-looking director of planning, building, and environmental services, David Morrison; and two of his staff, gripping clipboards. Also present is retired Anheuser-Busch quality assurance manager Jim Wilson, who helped get a voter initiative called Measure C on the June ballot, a turn of events that split the valley in two politically.
The tour is designed to present county officials with the real-life consequences of government land-use decisions. Anderson gestures upward at the otherwise wooded mountain, which from our vantage looks more like the spoil from an open-pit mine. “What do we do with this mountain?” she asks. The question is rhetorical, but we know what’s at stake: It’s the very fiber of what makes Napa County so special, and also so coveted.
Measure C sought to protect trees close to streams and limit oak removal on Napa’s hillsides. But as soon became clear, environmentalists’ concerns were not exactly the main source of the conflict: Rather, the measure morphed into a broad referendum on the future of wine country. Would it, as supporters hoped, represent a first step in saying “no more” to the corporate interests transforming Napa into a booze-soaked Disneyland? Or was it the work of gray-haired NIMBYs turning their backs on a $9.4-­billion-a-year industry that floats all boats? In the end, the question led to the pairing up of new and sometimes strange bedfellows, accusations of dirty dealing, and the perhaps-permanent bifurcation of the valley.
On Election Day in June, the measure fell short by 641 votes, out of 35,707 cast. The specifics put before voters may have been settled for the time being, but the larger question about the future of the region remains. “We know how an initiative is done now,” Wilson tells me of the fight. “Our backers are in it for the long game. Moral outrage in the valley is mounting.”

As I wrote in a trilogy of books about Napa, for over half a century the valley has attracted wannabe winemakers and tourists, at rates that have accelerated with every passing decade. One consequence is that the valley floor has simply run out of land for new plantings. In 1968, when Napa Valley’s agricultural preserve, the first of its kind in the nation, was created, the county’s vineyards amounted to just under 14,000 acres. Today, that number is 46,000. Comprising 65 wineries in 1968, the Napa Valley American Viticultural Area now includes 540. The remaining undeveloped land is mostly hillside—land once considered too unstable for planting—so new vineyards are perched atop knife-edge ridges on Howell Mountain and Atlas Peak. The latter borders the site of a decades-long dispute over a vineyard proposed by Hall Wines. It’s currently tied up in appeals by activists fighting the 209-acre plan known as Walt Ranch (about 80 percent of the land burned during last October’s fires).
More than three million visitors now flood the valley every year. Many existing wineries have taken to supplanting tasting rooms with “event centers”—a euphemism for full-blown restaurants and concert venues—in hope of luring even more tourists. For Wilson and others concerned about the strain placed on the valley by the extra traffic, the environmental damage wrought by farming runoff, and the loss of Napa’s rural sense of place, the tourism dollars simply aren’t worth the trade.
So Wilson and a retired commercial pilot named Mike Hackett, who lives in Angwin, set about crafting Measure C. Hoping to strike an agreement on the initiative, they met with members of the powerful Napa Valley Vintners, which had backed environmental measures in the past, including a ­hillside-erosion ordinance in 1991. Many vintners wanted to collaborate on Measure C. Some, among them Michael Honig, the president and CEO of Honig Vineyard & Winery, even helped to shape it. But at a meeting in September 2017, the association’s board of directors voted to withdraw from negotiations. Ultimately, the vintners opposed the measure, and other trade organizations, including the Napa County Farm Bureau, Napa Valley Grapegrowers, and Winegrowers of Napa County, followed suit. The opposition campaign spent more than $835,000 to defeat the measure.
That’s not to say that environmental activists and wine growers were perfectly divided. The Napa Valley Register hinted at that tension in its endorsement of a no vote, calling the initiative “the right idea in the wrong vehicle.” Several prominent winemakers publicly supported Measure C, including Beth Novak Milliken, CEO of and heir to the venerable St. Helena winery Spottswoode, who voted in defiance of the trade group to which she belongs. “Something had to be done,” she explains. “The valley has lost much of its agrarian character in my lifetime. We’re letting this place slip away.”
Back on our tour, the group stops at a bald spot atop Howell Mountain in the middle of what Wilson calls “primeval forest.” Save Rural Angwin and others opposed the logging here, which clear-cut two parcels totaling 21 acres to make way for vineyards. “It’s a blasting-exposed, baked ridgeline,” Anderson says. Still, she and her allies remain undaunted. Tensions have risen and may not go down soon—the county board of supervisors has begun to put together a new strategic plan that would address the impact of tourism on quality of life for residents and the concerns about hillside vineyard construction raised by proponents of Measure C. The level of trust between activists and elected officials, however, remains low. For now, Hackett won’t rule out another swing at the ballot box in two years. “If nothing substantive occurs between now and a year from now, we will be back with another initiative,” he says, “and we will not be defeated.”
* 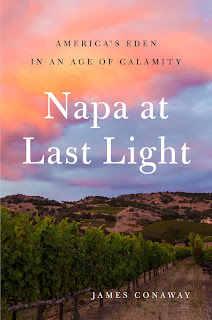 Posted by Jim Conaway at 4:55 AM No comments: Links to this post