A plastic pool of one's own 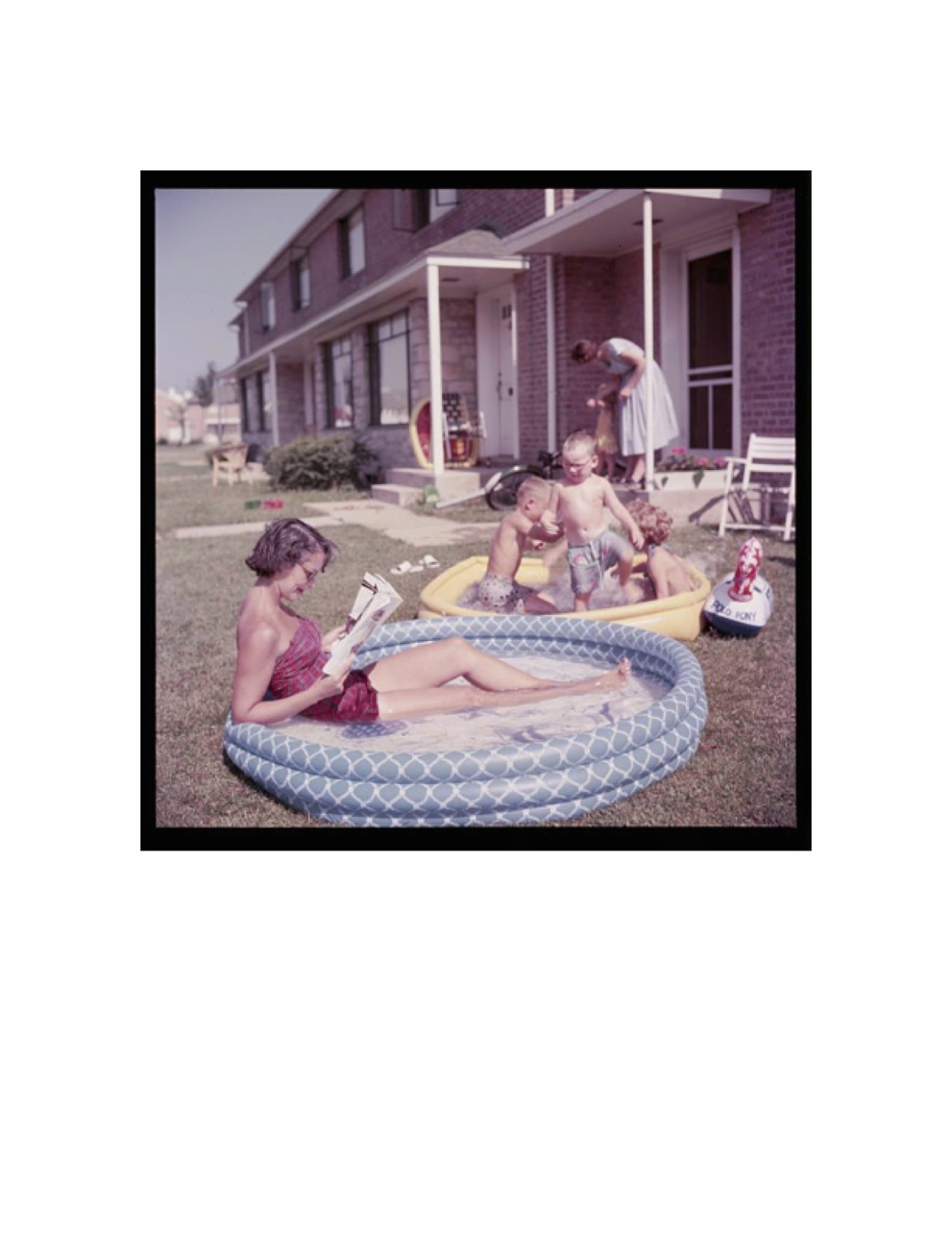 The kids in the portable pool on the lawn are rambunctious, but not too, their bodies bright in the sun, the shadows starkly defined. There’s something touching about the little boy’s eyeglasses, like his seriousness: He’s going to enjoy himself, period.
Mom has her own pool and is reading a magazine, either enjoying or improving herself, maybe both. Her arms are propped on the blow-up pool sides, and the bright plaid one-piece bathing suit and sunglasses become her. So do the raised knee and polished toenails. There’s another, empty blow-up pool on a neighbor’s porch, leaning against the wall; it’s hot in Park Forest and everybody’s going to make the best of it when they get the chance. At the conclusion of the last war, 800,000 women were fired from jobs in the aircraft, automotive and other industries, to make way for men. Women belong in the home now, using their “pretty heads” to advance their husbands’ careers. They try to look sexy and house-bound at the same time, one-piece bathing suits for beauty contests and for sitting in the kiddy pool in leafy neighborhoods far from a city. Skirts are long, underwear powerfully conforming. Matrons look matronly, but then so do teenagers, many of whom are taking up sewing “two-piece patterns.” Women still on America’s assembly lines look neither matronly nor, even if pretty, remotely like the women on magazine covers who seem to have been poured into molds dusted with pancake makeup, teeth preternaturally white, their auroras of hair luminously, lusciously blonde, their good humor painfully intense.
(from The Forgotten Fifties)
To see my bio, click on: http://cjonwine.blogspot.com/2014/09/heres-my-new-bio.html
For other, newly-released titles, go to:
http://www.fearlessbooks.com/Conaway.htm
To order my novel, Nose, click on:
http://www.amazon.com/Nose-Novel-James-Conaway/dp/1250006848/ref=sr_1_1?s=books&ie=UTF8&qid=1362180145&sr=1-1&keywords=nose
To order my book of travel essays go to:

Posted by Jim Conaway at 8:41 AM No comments: Links to this post 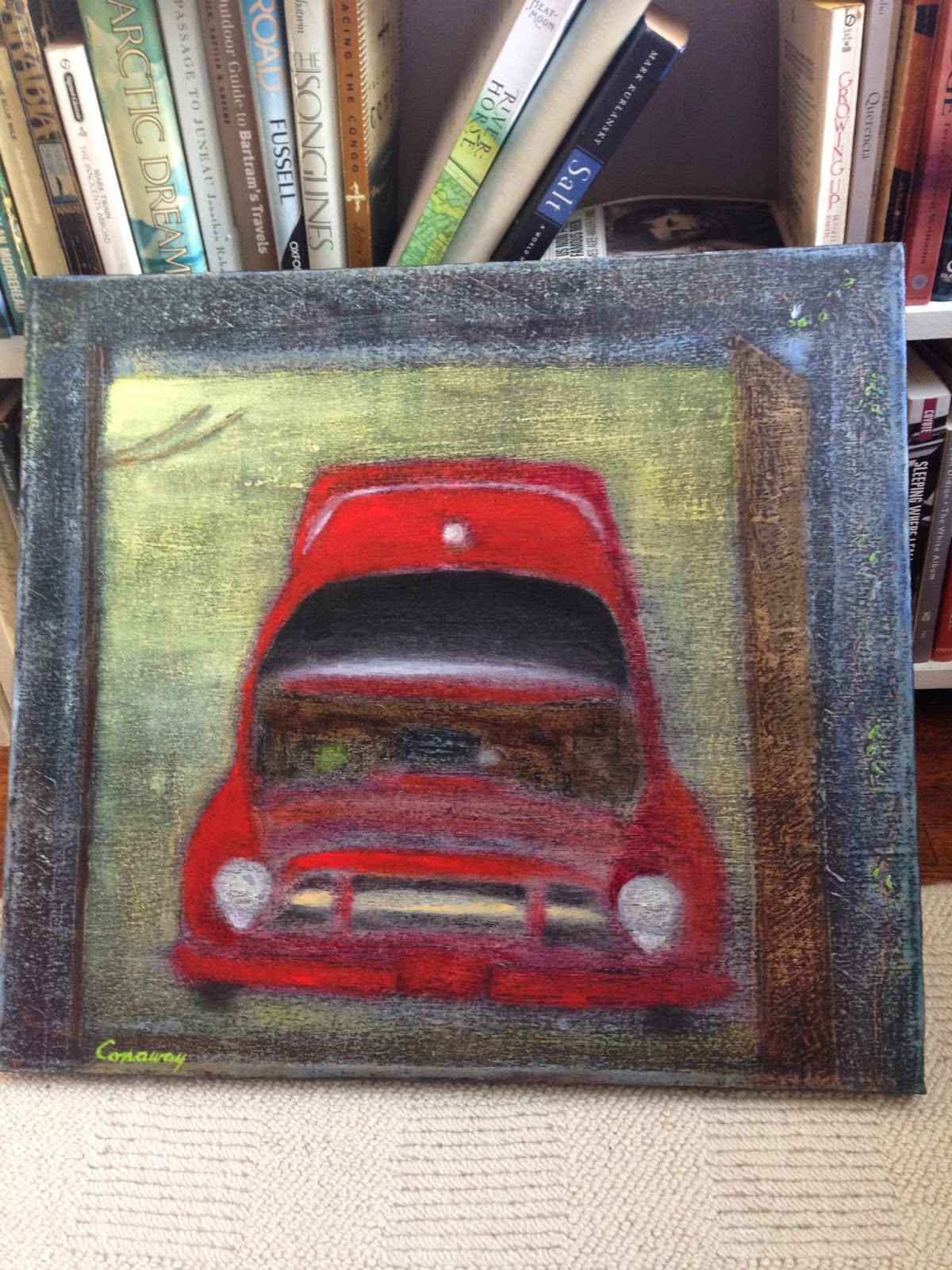 This painting started out as a kind of colorized negative of a 1954 Ford pickup I owned years ago and sold to Brian Noyes, for whom it (and a subsequent '54 bought from Tommy Hilfiger ) served as inspiration for Brian's bakery, Red Truck. That's in Warrenton, Va., with another to open in Little Washington, Rappahannock County, not far from the Inn.
I thought the original painting lacked subtlety and the colors were too bright, and decided to paint something else. I began sanding the canvas, and the dimmer the pickup became, the more interesting it got.
Originally it was dimly lit, most of the light on the outside of the shed, but in the new painting the exterior became night (with the assistance of Prussian blue painted on and then wiped off) and the blossoms on the clinging honeysuckle barely visible. The interior of the shed was now suffused with light from a hidden bulb, while truck itself with its raised hood assumed the ghostly reality of the not-so-distant past, almost medieval in its technical simplicity.
Posted by Jim Conaway at 3:05 PM No comments: Links to this post

Mexican laws permit tequila to be produced only in the state of Jalisco and limited regions in the states of Guanajuato, Michoacán, Nayarit, and Tamaulipas. (Photograph by Holger Leue, Corbis Images)
The ritual looked simple enough: Lick the back of your hand, sprinkle salt on it, lick the salt, knock back a jigger of distilled cactus juice, and suck a lime wedge. Trouble is, those things tended to get mixed up: lime preceded salt, tequila followed, everything dribbling from my chin as the ritual was repeated. Nobody gave a damn, though—until the next morning.
That was a long time ago, of course, in San Miguel de Allende, Mexico. Since then my tequila drinking has gotten a bit more sophisticated and my tastes more expensive. But even behind the best tequila lurks the physical heat and spiritual intensity of the country of its origin, whether you’re drinking it by the shot (caballito) or in the heavenly embrace of lime juice con orange liqueur and shaved ice.
The gleam in the eyes of the men drinking in San Miguel back then was rooted not in demon worship but in that unique, slightly strange botanic wonder known as agave tequilana, that sprawling blue-gray plant suggesting a muscular, upended octopus with spines on the tentacles. It’s actually not a cactus but a cousin of the lily, the only reassuring thing about agave, which is grown in the states of Tamaulipas and, more notably, in Jalisco, where the town of Tequila is located.
Mescal is more or less the same stuff, but made from the maguey, or americana, variety of the agave down toward Oaxaca, and not entitled to the name, tequila (and not because a worm sometimes ends up in the bottle). The novelist, Malcolm Lowry, whose fine novel, Under the Volcano, is set in Mexico, described mescal as “ten yards of barbed wire.” Lowry wasn’t known for connoisseurship but for writing exquisite prose, under the auspices of serious hooch.

A farmer harvests an agave plant in Tequila, Mexico. (Photograph by celso, Flickr)
Jose Antonio de Cuervo was given land that included a small mescal factory some time in the late 17th century, but it’s tequila that eventually took over the market. To make it, the agave leaves are lopped off by experienced mescaleros and—for the good stuff—the hearts (piñas) extracted, tossed into a pit of smoldering charcoal, and shipped off to the distiller where they’re cooked and crushed. The fermented juice that’s produced is then distilled to about 150 percent alcohol and eventually cut with good water to about 80 percent.
For blanco, the tequila goes straight into the bottle, but for reposado it is aged first in wood casks, which gives it greater complexity and a warm, golden hue. Tequila may be the national drink of Mexico, but most of it goes down the gullets of Americans. It has progressed in the popular imagination from firewater for peasants to cozy fuel for the upwardly (and downwardly) mobile.
The good stuff should be drunk by itself, so go easy on that salt and lime wedge, which get in the way of the appreciation a well-made tequila deserves. There are many of those, including Patrón which is good but over-priced. One of the best so-called “single field” tequilas I have had is Ocho, which with its small-batch production and high standards is worth seeking out.
You won’t get a hangover from good tequila, unless you go rogue (that, admittedly, is a problem). For one thing, the alcohol level is generally lower in tequila than in vodka, gin, and so on, and tequila’s made not from grain but from fruit, a whole different category in the glorious tradition of Calvados, Cognac, eau de vie, etc.
Middling level good tequila—Espolón, say, or Hornitos—makes what I consider to be the very best warm weather drink, one with character and complexity and, yes, charm, plus your daily requirement of citrus. It’s known as the margarita. Best to make a small batch in a pitcher, with a quarter of a jigger max of Cointreau per drink, not the watery Triple Sec, and a couple of squeezed limes tossed into the mix. The essence of oil the fruits impart is crucial to the drink’s frisson.
Use good (un-iodized) sea salt for the rims of the glasses, which should be put in the freezer for a few minutes before the main event. The margarita is a noble drink, despite the fact that it was made famous by a plebeian. Jimmy Buffett sang of “that frozen concoction that helps me hang on.”
Let go is more like it.
James Conaway is a featured contributor for Intelligent Travel and writes for other publications devoted to travel, history, and culture. Read more from James on his wine blog and check out his latest book, Nose.

Posted by Jim Conaway at 6:18 PM No comments: Links to this post