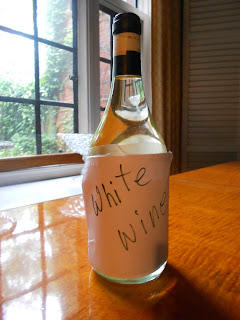 Confusion could be best exemplified by an American wine drinker (including me) looking at a shelf of Italian whites. The awesome variety of grapes, regions and vineyards in Italy induces stunned myopia; often the only focus is price. In fact, the price of Italian white wine is usually right.
For years Americans too sophisticated for Lambrusco and too thrifty even for Macon-Villages depended on inexpensive Italian whites to float hot-weather brunches and dinner parties. Some thought Italy produced only two wines: Bolla and I Folonari. The former came in a skinny green bottle, tasted good, and didn’t cost much. The latter came in a bigger bottle, was a bit rough on the palate, and cost less. Bolla and Folonari are, of course, producers, not grapes.
The popular soave is made near its eponymous town in the foothills of the Alps. Traditionally dry, undemanding and perfectly respectable, it’s made from the garganega and trebbiano grapes, with maybe a little riesling in the blend. Pale in color, refreshing when the weather’s otherwise, soave has fallen to increased sophistication among wine drinkers, but there are still some very nice ones around that are exceptional cheap.
Another Italian white that Americans used to drink in great quantities is frascati, much of which tasted like improved ice water and was really cheap. Frascati, a town in the Alban Hills outside Rome, was an important producer of the Castelli Romani's traditional table wines, but frascati doesn’t travel well. Made primarily from the malvasia grape, it tends to oxidize, and for years was mostly consumed by Romans who mixed it with other beverages -including water and Coca-Cola.
Better wine-making practices dramatically improved frascati, as they did so many other Italian wines. The trebbiano grape is a strong presence in many an Italian bargain. A good value today among everyday Italian whites is still Bianco di Pitigliano, a dry, lively wine made from trebbiano and a number of other grapes of Tuscany. Also from Tuscany comes vernaccia, a grape as old as Italian wine-making and still one of the most reasonably priced.
Vernaccia di San Gimignano, named for the walled city, is excellent summer fare - light, with a slightly bitter edge. It goes well with fish, and makes a good aperitivo on a hot night.
What has become the Italian standby, pinot grigio, is fruity and also lends itself to summer drinking. In its more substantial versions pinot grigio is a fine accompaniment for distinctly flavored dishes. But for the more ambitious I recommend the whites made in the vicinity of Collio, in the northeast corner of Italy. Although they cost more than the wines already mentioned, they offer more complexity. Tocai friulano (no relation to either Hungarian tokay) is the favored white of Collio, fragrant but dry, with good acidity.

... and concluded (back to the bottle)