This is the cover of my new novel (some slight variations possible), due out from Thomas Dunne Books (St. Martin's Press) early in the new year. No, it has nothing to do with this blog, but then there is a blog within the novel. Worlds within worlds. 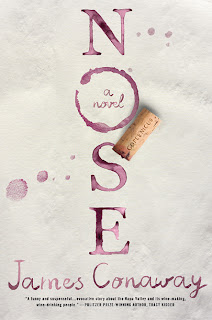 The Joys of a Small Cellar


Collecting wine can be dangerous to your health. I’m not talking livers here, but minds. I know of a doctor who began collecting wine as a hobby, and ended up with an obsession. He rented space in temperature-controlled rooms all over town for his considerable cellar of fine bordeaux, burgundies and ports. He owns more wine than he can ever drink. A lot of what he buys nowadays won’t even mature in his lifetime, yet he can’t stop.
The big collectors are different from you and me. Consider the case of a man who stored his extensive wine cellar with friends in an exclusive section of a large American city. The friends had three teen-age children who, with their buddies, got into the habit of dipping into the cellar on
unsupervised weekends and popping corks. Being orderly, they re-corked the empty bottles and put them back in the crates. This ritual got them through high school in some fashion – I don’t know about their grades, but their palates should be awesome – and only later did the owner discover that about $50,000 worth of less-than-well-aged wine had gone down somebody’s gullet.
Here’s the big difference between that, and losing a bottle of cooking sherry to a thirsty guest. In between lies the need for a reasonable assemblage of wine reasonably monitored. The joys of a small cellar are many, and usually subtle. They have more to do with convenience than value, more with generosity than ostentation. With a small cellar, you can produce something special to drink when a friend arrives. You can enjoy wine regularly without having to cart it home every night. You can purchase wine by the case, and thereby take advantage of bargains. As a student of wine, you can have a modest library.
A small cellar is a relative thing. Two cases of wine are too few, 20 are too many. My definition of a small cellar is one whose contents you can recall, however hazily. You know you have a few cases of bordeaux, and – roughly - which vintages. There's some less expensive cabernet from Chile for immediate drinking, and that mixed case of reduced California chardonnay. Also some pinot grigio in big bottles for parties, and a white Graves for oysters, should they materialize. Only one bottle of port, and some sparklers. You can correct deficiencies as soon as the sales begin.
A small cellar should, however, contain some surprises. You should occasionally come upon something you forgot was there, a sensation similar to that produced by finding money on the pavement. You originally paid for the wine, but that pain belongs to the past. Or the bottle may have been brought by a friend and put away until the proper time to drink it.
Gifts are another advantage of keeping a small cellar. How many times have you wished, going out the door to dinner, that you had a bottle of something decent to take along? Having some, wine on hand solves that problem, and offers larger possibilities as well. When my son’s 21st birthday loomed, as everyone’s must, I wanted to give him something memorable, but also usable. He, naturally, wanted cash. In the cellar I had a case of '81 Lynch-Bages, a cru classé from Pauillac. I made copies of descriptions of the chateau and vintage for him, figuring the wine would be ready to drink about the
time his preference for beer ameliorated.
Small cellars must meet certain standards if the wine is to last even a short time. First, there must be an absence of light, which can ruin wine faster than you realize. If absolute darkness isn't possible, then a shadowy nook is far better than shelves exposed even to a light bulb a portion of each day. Store wine bottles on their sides, to keep the corks moist and therefore airtight. Try to store them away from washing machines and other sources of vibration, which over the long run will terminally discombobulate your wine.
Temperature is very important – both the degrees, and daily fluctuation. Summer heat can spoil wine left in basements that people assume are cool enough. If the temperature in your basement exceeds '70 degrees, you need an air conditioner, period. Furnaces can produce more heat than
wine and corks can stand, so bottles should  stored far from them, and clothes driers. Whatever the season, the temperature shouldn’t fall below the mid-’50s, and shouldn’t change more than five degrees in a day. Not everyone has a basement.
In apartments, the cellar requires more imagination. Wine storage units that resemble refrigerators can be had, but most people improvise with closets. Granted, closets are often dark, but they are also often hot and stuffy. If you use one, try to cut off any source of heat to it in winter, and leave the door open to air-conditioning in summer. A little light is less harmful than an August on the Potomac.
I   know an ardent enophile who lives in a two-bedroom apartment. One bedroom is for him, the other for his wine. There the shades are always drawn; in the winter, the wine is stacked against the outside wall. In summer, he moves it across the room and cranks up the central air-conditioning.
There are stranger wine cellars. Some people even keep them on sailboats. I knew one wine writer who maintained a small cellar in the trunk of a car. It didn’t do much for the wine, but it did wonders for her sense of well-being.


soild post, sir! like everything, there is so much bs due to information innundation. thank you for not only cutting though the bs, but adding great color.  PW
Posted by Jim Conaway at 5:31 PM 1 comment: Links to this post