Demand an animal in your glass

…Wine has an animal life. Wine suffers a heaving birth. It has a rough, groping childhood. It develops into adolescence. Then, if it does not sicken, it matures; and in this it is almost human since it does not mature according to a fixed rule but according to the law of its particular and individual personality. The act that gives it personality is the act of fermentation. In this metamorphosis it is changed from fruit into animal; sometimes even into an animal of splendor.

William Younger
Gods, Men and Wine
Posted by Jim Conaway at 1:12 PM No comments: Links to this post 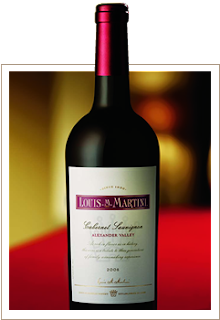 Fanciers of red wine have a broader choice today than at any time in history, and a better chance of pulling the cork on a well-made, unadulterated product. The problems associated with drinking good red wine, however, are persistent and related: most reds get drunk too young because neither individuals nor restaurants want to cellar wine. Consequently, reds with any age on them are usually too expensive for everyday drinking, and they can engender apoplexy when encountered on a typically pumped-up restaurant wine list.
Wineries could ameliorate these problems by holding back their best reds for a couple of extra years before releasing them, so they would be closer to optimum development. But storing wine is expensive for them, and for wineries, too. Most need to sell all available stock as soon as possible to stay solvent, but there are notable exceptions.
One used to be the Louis M. Martini Winery in Napa Valley, owned today by the Gallo family but named for an Italian immigrant from Genoa who went from selling fish in San Francisco's North Beach in the early 20th century to making and marketing some of the post-Prohibition wine that put the Napa Valley on the map. Martini was what used to be known in the valley as an "old-time Italian," meaning opinionated and highly volatile, but his vision of the future of California wine was crystal clear.
He invested in vineyards in the Carneros region of southern Napa, later acclaimed for pinot noir and chardonnay, and also bought 600 acres on the westward-facing slopes just over the Mayacamas range, in Sonoma County, one of the most spectacular vineyard sites. It’s still known as Monte Rosso (roughly, High Red) and produces considerable quantities of fine cabernet sauvignon and zinfandel.
The land - like the Martini winery - stayed in the family for more than half a century before being to sold to Ernest and Julio. The Martinis didn’t have mortgage payments to make, and presumably the Gallos don’t either, but the wine’s more competitively priced than most from fledgling boutiques that have high overhead, or conglomerates with investors to satisfy. That means they can afford to hold some wines back so that people can drink them when the wines are ready.
A case in point might be the current Monte Rosso, not yet imminently drinkable but with distinct varietal character and soft, lustrous appeal. Unfortunately it costs $145 a bottle, by no means outrageous by the standards of high-end cabs, but beyond the concept of “bargain.” The best Martini value these days is their cabernet made from Alexander Valley fruit, far from High Red but at 35 bucks still barely within the realm of a possible deal.
Posted by Jim Conaway at 10:48 AM No comments: Links to this post

Hands Across the Sea: JCB No.3 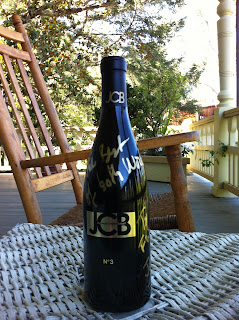 You’re probably thinking four hours is too long for lunch. But there was a lot to do: drink some elegant Raymond Vineyards 2011 reserve chardonnay more akin to good Chablis than an over-oaked Californian, assess three powerful, vineyard select ’08 Raymond cabernet sauvignons from haut Napa Valley appellations - Oakville, Rutherford, and St. Helena – and a graceful blend called Generations, and encounter for the first time a bright, complex blend of French and American pinot noir – that’s right - called simply JCB No. 3.
I can say with confidence that you haven’t tasted the last wine. Also that you should. But first a little ambiance: Raymond Vineyards’ vernal garden setting on the edge of the Rutherford appellation, white Louis Quatorze-ish chairs made of soft, weather-defying synthetics, and a table at which sit the versatile woman responsible for making most of these wines, Stephanie Putnam, and four men – five if you count chef, up and down – including the owner of it all, Jean-Charles Boisset, scion of Burgundy’s third-largest wine producing family and a catalytic force there, in Napa, and abroad.
But first the sustenance: thin slices of heirloom tomato in pungent olive oil, and an all-American medley of succulent protein including bison, and alligator. The latter’s a tribute to the memory of Agoston Haraszthy, the early Hungarian disciple of California wine and so-called Count of Buena Vista who built that Sonoma winery in 1857 and was later - supposedly - devoured by a crocodile in Nicaragua.
Jean-Charles now owns DeLoach and Lyeth, as well as Buena Vista, an iconic property in the throes of renovation. (As we lunch those grounds are being prepared for a production of A Midsummer Night’s Dream in a week, and the pavement’s yet to be laid.) At Raymond Jean-Charles has ushered in changes transcending even the valley’s complicated vision of itself (see The Red Room, 3/23/12). When he says, “I’m bullish on wine,” it’s not the usual hype, but a real – meaning monied – effort for cooperation among counties, countries, and traditions.
Cooperation hasn’t had this much visibility since Robert Mondavi greased the wheels for Opus One with the Baron de Rothschild. The difference today is that Jean-Charles pushes all the envelopes – including the notion of sacrosanct regional integrity. No. 3 is another keyhole onto the new global vineyard, an intercontinental blend of pinot noir – 60 percent from Nuits St. Georges in the Cote de Nuits, and 40 percent from vineyards in the Russian River valley.
The French component was loaded - yes, in barrel – onto a jetliner and flown here for a high-end cuvee without precedent. The wine’s dedicated to twins born to Jean-Charles and his wife, Gina, of the Gallo clan, but the name refers to the ultimate wisdom of blending: “The whole is stronger than its parts.” The wine’s very good, the concept daring, and the reality the best answer yet to the faulty political assertion that French and American cultures aren’t intertwined. (Remember the idiotic “freedom fries”?)
So, go Jean-Charles. Who knows, cabernet might soon be winging into Rutherford from Bordeaux.
Posted by Jim Conaway at 9:45 AM No comments: Links to this post 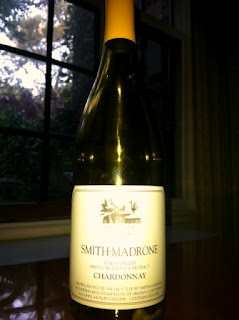 This crepuscular photo is actually of a bright, lightly oaked 2010 chardonnay from Smith-Madrone, the current release from a now old-line winery up on Spring Mountain in Napa Valley. The name’s charmingly half man, half tree, appropriate since Stu Smith, the founder, is a heavily-bearded, broad-shouldered hold-over from the Sixties, more Doug fir than madrone, though, and as outspoken and unpredictable as ever. I’ve known Stu for many of those years, and written about him, and although we rarely agree politically I respect his integrity and rare refusal to get caught up in the flashier aspects of the high-end wine business. His refusal to sell out – both to trendiness in wine-making, and to big money – redounds to the benefit of all who value self-reliant rural culture, continuity in landscape, and classic wine-making. Smith-Madrone just keeps on trucking: excellent, well-made, relatively inexpensive wines with commendably low alcohol by modern standards. This chardonnay, and the excellent, classically-made 2009 cabernet sauvignon, are both just over 14 percent, and relative bargains in the ever-active NV sweepstakes.
Posted by Jim Conaway at 8:25 AM 1 comment: Links to this post