Katmandu I: Sickness is insight

The long reach of water-born microbes extended even to the salad served aboard the Nepalese airliner returning to Katmandu from Delhi. By the time I checked into the Yak and Yeti Hotel I was unusually pensive, and an hour later I was lying on my back. How appropriate to be sick in Katmandu, I thought: sickness is insight.
My mission was to look into the link between culture and disease, between some of the world's most ancient beliefs - over-lapping Hinduism and Buddhism - and its lethal disorder, Acquired Immune Deficiency Syndrome. According to the Nepalese government, 202 of its citizens were HIV positive. The World Health Organization put the number of cases at about 5,000 then, still a relatively small number in a population of 18.5 million. AIDS was reportedly rampant in India and Thailand but seemed remote from this tiny, isolated country floating above Asia's generally daunting statistics.
Being afflicted with a stomach ailment in a good hotel has its advantages. Yogurt and toast brought by men in brocade waistcoats are among them, but most important was the working telephone. 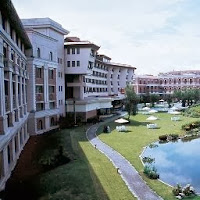 I began by trying to reach authorities in the Ministry of Health, the Ministry of Home Affairs, then the Social Welfare Council, without success. I did learn of an AIDS clinic, in a hospital for infectious diseases on the other side of the city, and eventually took a motorized rickshaw back through the pandemonium of the two-stroke engine that is Katmandu.
The monsoon had transformed the ambient atmosphere of the world's highest city from merely congestive to miasmic, blotting from view the world's highest mountains. The potent blend of incense, woodsmoke, and carbon monoxide, the carvings of copulating deities on street corners, heaped refuse and everywhere, courtesy of the transistor radio, the haunting nasal voice of a woman singing in a language I could not understand, all suggested that western perceptions might not work here, that my search would lead through cultural thickets without counterparts in the industrial sectors of the planet.

I entered a red brick building at the end of a rutted lane and joined a clot of patients holding rags over noses and mouths. Vague directions from the receptionist led me to another building, where the process was repeated. Eventually I found myself in a stairwell with a bicycle, wondering what went through the minds of those with lethal infections as they climbed stairs toward a landing where a woman slept in an old stuffed chair without armrests, outside a screen door.
In an office containing a bare desk and a filing cabinet sat a pleasant Nepalese man in an open-necked shirt, one of three doctors in the National Center for AIDS and STD Control. He graciously explained the situation as he saw it: AIDS entered Nepal through the vector of migrant labor, primarily "sex workers" - the euphemism of choice in the world health community for prostitutes - returning from India.
The center had tested 150,000 people, many of them living in villages where prostitution was generational, and had come up with the official figure of 202 testing positive for HIV. But he accepted the WHO's estimate of 5,000, and expected 10,000 cases by the end of the century: "We are trying to convince the policy-makers that this is going to be a major trait in Nepal."
One of the problems was communication. Information about AIDS and its symptoms had not reached most of the population, with its literacy rate of only 40 percent, and possibly as low as 15 percent. Television was not generally available. There were no identifiable red light districts in which to distribute leaflets and condoms and to do research, and no discreet gay community. Talking about sex was not acceptable on any level of Nepal's social hierarchy. The most common symptom of AIDS in Nepal was tuberculosis, a fairly common ailment, and everyone who had TB could not be tested.
And then there was the problem of Nepal's traditional allopathic medicine, known as Ayurveda, which prescribed remedies to counteract symptoms of disease, rather than the causes. "Allopathy doesn't recognize the difference between white cells and T cells." He added, with a smile, "Science has some basis, and you must follow it. That is our feeling." But it was not necessarily the feeling of the large sector of the population going to Ayurvedic doctors.

Ayurveda means "sands of time" in Sanskrit, the classical Indic language equally bound up in the rituals of Hindu and Buddhist. An Ayurvedic practitioner in Katmandu claimed to have a cure for AIDS, a riveting possibility anywhere today, in any guise, and one that led me into the howling byways behind Durbar Square.
The hooded eyes painted on the little "stupa" - another Sanskrit word for the tower-like Buddhist shrines - overlooked brass scales for weighing grain set up on brick worn to powder by foot traffic, and narrow alleys lined with jewelry, hardware and shoe stalls, jammed with motorcycles. Beneath all the haggling lay an unbroken rhythm of drum and cymbal and that hypnotic woman's voice, vaulting between Walkman knock-offs. The low archway led to an inner courtyard, and next to dispensary for Ayurvedic herbal remedies was the office of Dr. Mana Bajra Bajracharya.
A thin, middleaged man in sandals sat behind a dusty showcase full of pamphlets offering cures for asthma, hepatitis, diabetes, herpes, even cancer. "People have been dying of AIDS for centuries," a Dr. Mana told me, dismissing the claim that AIDS was a new threat. "Technology has just recently made identification of the virus possible."
His treatment, he said, increased immunity through the use of natural substances and thereby counteracted the virus. He claimed to have helped AIDS patients in various parts of the world. I asked why the cure had not been broadly adopted, if it was effective. "Everybody asks this question," he said wearily. "This is not western medicine."
His procedure cost $300. The herpes treatment was even cheaper, $60. Under the heading "The Ayurvedic Concept of Herpes," in the pamphlet he had written, "Ayurveda points out that the herpes genitalia is concerned with a poisonous moss which is allergic... The powder of it is used to rub on the penis to increase the bulk of it ... Anyone who uses it can have herpes." His prescription involved "medicine for cleaning the lymphatic duct system and blood cleansing medicine," the components of which "maintain the alkaline reaction of blood, neutralize the toxic agents and promote to excrete the bodily dirt e.g. bile, uric acid, et cetera. Gradually western medicine has come here," Mana said. "But 90 percent of the people still take Ayruvedic."
The "cures" seemed preposterous but not necessarily harmful. There was no doubt comfort for many in the ancient tradition, and quite possibly a lethal distraction when it came to AIDS. I had found that the body drove the mind here, that the notion of Ayruvedic medicine in the strange and tantalizing cacophony of Katmandu gave rise to irrational hopes. So before leaving I asked if he had a cure for diarrhea.

Westerners do tend to under-estimate the complexity of so-called third world countries. The problem, it seemed, was the layer of technology over native fatalism. A person casual about putting oil into a motor-scooter on which his livelihood depended was not easily induced to wear a condom; a country reluctant to embrace the septic system was unlikely to heed the tolling bell of even a pandemic. During the ten years it would normally take a Nepalese to succumb to AIDS he might well already be dead of one of a number of common water- and air-born diseases unrelated to the virus.
Meanwhile the government functioned, if that is the word, to maintain Nepal's strict social hierarchy. Everyday the official English language newspaper, The Rising Nepal, ran a front page column devoted to the doings of His Royal Highness Crown Prince Dipendra Bir Bikram Shah Dev. "Crown Prince Graces Luncheon" was a typical headline; that issue also contained an editorial besieging Katmanduites "not to throw garbage outside their houses for a few days in the wake of continuous rains," and an article about drug abuse in which the Home Minister estimated that 30,000 teenagers in Nepal were involved. But not a word about AIDS.
Non-government organizations (NGOs) existed by the thousands, dealing with problems the bureaucracy was incapable of addressing, or unwilling to. Many NGOs were purely entrepreneurial reactions to awards made by outside agencies for research of all kinds, springing up to absorb foreign money and provide jobs for the university-educated upper class, then disappearing when the grants were exhausted. Some, however, were said to be effective, and one of these, LALS (the Lifesaving and Lifegiving Society) had contact with those Nepalese who, other than prostitutes, were most at risk - intravenous drug-users.
I found LALS offices on the Dillibazaar, in a little villa with motorbikes parked in the foyer. A sign on the wall advised, in English, "Be Here for the Cure." An American named Aaron explained that the clinic provided services for about 650 injecting drug addicts, about three per cent of whom were HIV positive. Since society was managed by caste, and there was no caste for IUDs - or for garbage collectors - LALS was performing a necessary function.
I joined in a taxi three of the clinic's outreach staff, including a pretty university graduate, Shobha, who spoke English and was bound for Pashupatinath, the religious center on the outskirts of the city. Shobha carried a bag full of clean needles and bleach, and a plastic bucket for syringe disposal - the kit of the contemporary community activist in most any city in the world today.

"Pashupati" was the most important Hindu site in Nepal and one of the most important on the continent. The road down to the Bagmati River wound past stalls selling mallas, cheap knives, block prints of Hindu gods, mango juice. A huge statue of the bull, Nandi, the vehicle of the supreme god, Shiva, guarded the entrance to Pashupati. Shiva was also, in one of the many transmogrifications of Nepalese belief, the mythical dancer, Nataraja, who gave the universe a good shaking out and thereby created the earth. But Shiva had a dark side, one that began to reveal itself that morning.

In front of the Ram temple we met a 19-year-old I will call Yari, glassy-eyed but pleasant, wearing a malla around his neck and a kind of sari; he was a sadhu, one of the thousands of aspiring holy men in Katmandu. On Yari's forehead was the red mark of the pilgrim. 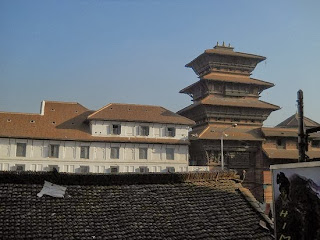 We talked while Shobha passed out needles to a younger addict, one with a quarter-gram habit that cost him 250 rupees a day. Yari told me he had been using drugs since he was 14, first alcohol, then ganja (marijuana) and finally "brown sugar," or heroin from India, Pakistan or Afghanistan. He had been off hard drugs for a month and a half.
Ganja was another matter. The drug was seen as an aid to meditation by the sadhus and allowed in small quantities by the authorities. Even as Yari discussed the advantages of abstinence he excused himself for a moment to join a group of sadhus and take a decided hit from their bong, the pipe with a rag wrapped around the mouthpiece, used for smoking ganja.
I asked Shobha if Yari or his friend were HIV positive. "Not yet," she said.

(Next: Katmandu's bodies and gods)
To see my bio, click on: http://cjonwine.blogspot.com/2013/02/heres-concise-bio-for-those-who-have.html