From the organizers of Washington's DC's enduring - and quite wonderful - annual Environmental Film Festival: 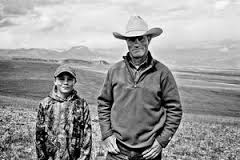 Rancher, Farmer, Fisherman
Thanks to The Reva and David Logan Foundation for its support of this evening.
From the Montana Rockies to the Kansas wheat fields and the Gulf of Mexico, families who work the land and sea are crossing political divides to find unexpected ways to protect the natural resources vital to their livelihoods. Based on Miriam Horn’s book and narrated by Tom Brokaw, Rancher, Farmer, Fisherman is the next chapter of conservation heroism, deep in America’s heartland.
A Discovery Documentary Film. Directed by Susan Froemke & John Hoffman. Co-directed by Beth Aala. (Saturday at 4 at the Carnegie Institution of Science on 16th St. NW)
*
For more than 20 years, the Environmental Film Festival has played a critical role in bringing together filmmakers, policymakers, scientists, educators, and citizens committed to the future of our planet.
Each March in Washington, D.C., we host America’s largest environmental film festival, presenting 150+ films to an audience of over 27,000.
By partnering with leading museums, embassies, universities and theaters, we aim to advance the public’s understanding of the environment and inspire action, through the power of film.
Founded in 1993, DCEFF is the longest-running environmental film festival in the United States. It has grown into a major collaborative, cultural event, both during the festival season and all year-round.
Posted by Jim Conaway at 6:42 AM