Wherein the New Orleans district attorney insults his luncheon guest over a bottle of Haut-Brion...

big mistake.
Third installment from the novel, World's End (for the previous two and other things related check blog contents to the right): 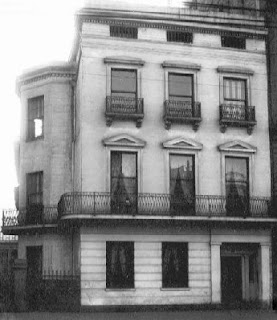 On Wednesdays the district attorney of Orleans Parish, Paul Boudin, always ordered oysters Bienville at the Bayou Club, followed by medallions of lamb. Before the meal he drank one old-fashioned, and he enhanced the food with a split of Haut-Brion '68. The club had no wine cellar worthy of the name, and he was forced to keep a small private stock — a fact that he did not publicize, because he didn't want to stand out from his fellow members.
Conformity was the word at the Bayou Club, second only in virtue to respectability. Business and professional men gathered there to affirm one another's worth and to exercise a subtle but pervasive influence on the financial and social affairs of the city. They all basked in their pleasant separation from the baser aspects of life beyond the entwined BC on the frosted glass of the front door. Boudin was one of the few politicians who had managed to get  beyond it.
The fare at the club, by New Orleans standards, was distinctly mediocre. Still, Boudin lunched there three days a week and was visible at the club to a point just short of indiscretion. He passed through the gate, glancing with satisfaction at the magnolia trees trained flat against the brick wall of the adjacent building. They gave the courtyard an air of Oriental formality: a sumptuous, green enclave in the heart of the business district.
Peck, the club doorman, greeted the District Attorney with pleasant familiarity. Every member valued a smile or a nod from Peck, the final arbiter in the subtle distinctions of status. Peck was essential in discriminating among acceptable and unacceptable guests. Several members had been embarrassed at the door when their guests were pleasantly turned away. "We're mighty happy to see you today, sir," Peck would say to the club member. "But I'm afraid your friend will have to stay outside." Peck could spot a Jew faster than any man in New Orleans, white or black.
Boudin passed through the hall and into the bar. Members drank in intimate little groups, at ease but acutely aware of the traffic through the club. Several nodded to the District Attorney, and one, a member of the Port Authority, waved him over. But Boudin just raised his hand in greeting and passed on. His guest waited upstairs, not the sort to be introduced casually to a group of Boudin's fellow members, but a well-known personality entertained out of a sense of responsibility.
He mounted the stairs, thinking of the full bottle of Haut-Brion he would have to order rather than the usual split. Bo O'Neill sat at a corner table, his back to the door, elbows propped on spotless linen. A squat glass of bourbon and ice stood before him. He seemed uninterested in his surroundings, but Boudin knew that nothing would please him more than to be invited to join the club. Both he and his father had sought admission, but Boudin and a dozen other members would see to it that no O'Neill ever belonged.
Boudin said loudly, "The flamboyant Mr. O'Neill," and quickly pulled out a chair to avoid having to shake hands.

Later, several diners glanced toward their table, attracted by their arguing. Boudin knew he was flushed but forced himself to say, "You don't like oysters?"
The muscles stood out in Bo’s jaw and he rattled the ice cubes in his glass. "Let's cut the crap, Boudin. If you're afraid to stick your neck out, get somebody else to."
"If I was afraid to stick my neck out I wouldn't be having lunch with you. Ah, here's the entree."
The waiter took away Boudin's empty platter and hovered beside his guest. Bo waved the untouched oysters away. At that moment Boudin hated him as much as he had hated Rory O'Neill, who had never bothered even to acknowledge the D.A. Now he would have his revenge. He picked up his wine glass and swirled the plush Haut-Brion up its sides. He tasted it. "Terrific."
"I need assurance of official action against the Cinques to keep my people in line."
"I'm sorry if you're having organizational difficulties. But I don't really see what I can do.”
Bo leaned over the medallions of lamb in wine sauce, garnished with fresh parsley. "What you mean is," he said, "you don't want to mess up your arrangements with the vending-machine boys. Some capo's generosity makes you reluctant to hit anybody important in their organization."
Boudin considered standing and walking away from the table, but that would be a sign of defeat. Besides, he was uncertain of the strength of his knees. "You must be crazy," he whispered, "making a wild charge like that."
"Boudin, you can stack that bagasse all day, as long as it doesn't hurt me. Now it is hurting."
"Why do you come up to the city at all?" he asked, his only defense in contempt. "You have enough to eat down there in World's End, and a warm place to sleep. Why come up here and bother responsible public servants?"
"If you were responsible I wouldn't have to squeeze you.”

“Threaten me, you mean. I'm sure you can spread that vicious rumor, not that it will make any difference when I come up again for election. I'm unbeatable, you know." Boudin forced himself to take a bite of meat. "Look around you, Mr. Boreal Arturo O'Neill. The office is just a job, but this is the place! The Bayou Club was built in i844 by James Gallier; it's here that the Queen of Rex meets her royal consort every Mardi Gras. The men in this room don't consider me an equal because I'm the D.A., they consider me an equal in spite of that fact. And do you think they would ever take your word against mine? I can tell you that they wouldn't. They like your enemies more than they like you because your enemies know their places."
Slowly Bo stood, dropping his napkin to the floor. His face was ashen, his eyes glistened. Boudin had gone too far. If Bo started to throttle him the District Attorney would offer no resistance, though he always carried a small silver automatic, maintaining decorum while waiters dragged the madman away. But Bo did not attack. He turned his forced smile — a tight row of very white teeth beneath a dark mustache — from the DA to the assembled members, then turned and made his way to the stairs. Going down, a hand on the dark mahogany banister, he brushed past a party on the way up to lunch. One man turned and said, “What the hell ..." but Bo was already crossing the hall. He passed under the malevolent gaze of the doorman and into the sudden warmth of a New Orleans April noon.
Blue had seen him coming and reached across the back seat to open the door. Bo got in. "Drive."
"Where to?"
"Uptown."
Bo’s hands trembled and he folded them in his lap to keep Blue from noticing. His earlier resolution not to be involved in public scenes could not have been more severely tested. In a strange way, he was grateful to Boudin for saying things that Bo had known but refused to accept. The Irish don't mix. His father had once told him that, with more than a little pride. Now Bo saw the truth and the strength of that position: if he was unacceptable to society, then he was not bound by its decorum and hypocrisy. Bo would deal with his father's enemies in time. But first he would deal with Boudin, who thought he could insult the O'Neills with impunity.
His driver held open the door of the big car. Inside, Bo picked up the receiver and called his facilitator, Gus Tomes. "I've got a job," Bo told him. "It’ll take a dozen men who know how to use tools and somebody good to lead them. Somebody with guts and a level head. It's risky and it's going to cost, but I want it done."
He gave the instructions and when he hung up, Blue, who had overheard, whistled softly. "Hot damn!" 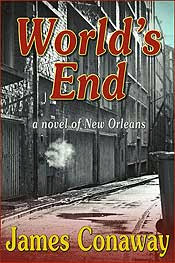 Next: bring down that house.