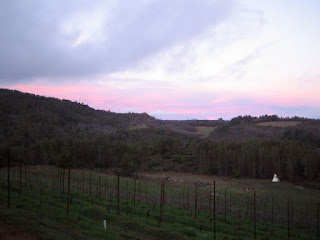 WINEMAKERS today in Oregon’s Willamette Valley are most interested in teasing out the tastes of discreet places, rather than tourism. In 2004 the valley divided itself into six sub-appellations, in recognition of distinct characteristics found in the different soils. The valley’s northern extremity is closer to Portland but has maintained an artisanal approach once considered quaint: small-lot fermentation, gentle handling, restrained use of oak.

This approach extends to land use. All have so far mostly avoided the allure of commercial development and heavy tourist promotion afflicting wine country nationwide.

“The good news is that young people today are for saving farmland,” I was told by Pat Dudley, co-founder of Bethel Heights Vineyard in the Eolo-Amity Hills. Her two daughters are involved in the business, as is a nephew. Their estate pinot noir includes some from Pommard clones, all planted in volcanic soils. The wine spends about a year in barrel, a third of it new oak, and emerges with soft tannins that enable some aging.

Other wineries that passing to the next, conservation-minded generation include Ponzi Vineyards; Chehalem Mountain Vineyard in the district of the same name; Elk Cove Vineyards in the Yamhill-Carlton district; and Lange Estate Winery and Vineyards and Sokol Blosser Winery, both in the Dundee Hills.

Pinot noir isn’t the only grape transformed by them into distinctive wine. That other Burgundian, chardonnay, was almost as ubiquitous, some of it with a distinct mineral quality often associated with Chablis. And a cousin of pinot noir, pinot gris, originally from Alsace, was first planted here by David Lett in the ‘60s. It soon evinced its own American personality: dry, suggestive of pear and apple, with a floral quality that avoids the cloying quality of many Italian pinot grigios.

But pinot noir remains the touchstone, which brings us back to Robert Drouin. So impressed was he by the Eyrie victory over the Burgundians in the ‘70s that Drouin came to Oregon in 1988, examined the red soil of Dundee, and bought some. He planted traditional Burgundian varieties, built a gravity-flow winery that would have been impossible in the crowded environs of his native Beaune, and named it Domain Drouhin.

Wine-making there has much in common with Burgundy, including new oak and tightly structured wines, but there’s a nod also to the new world in soft tannins. Drouhin’s daughter, Veronique Drouhin-Boss, a fourth generation winemaker, later took charge, and Domaine Drouhin allied with other wineries in the Willamette to defeat a proposed five-star hotel to be built in the heart of the Dundee Hills.

Willamette Wines aren’t cheap but they are wonderful. Some I particularly like are Bethel Heights, Domaine Drouhin, Eyrie, Elk Cove, Cristom, Adelsheim, Hamacher, and Chehalem. In the months ahead I expect that list to get a lot longer.