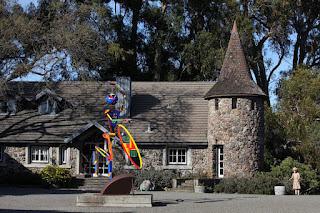 The sheep on that hillside off Highway 28, just north of San Francisco Bay, remind me that this place, called Carneros, is named for rams. It was once considered useless for anything but pasture, but today extensive vineyards indicate a different reality — primo chardonnay and pinot noir and, indirectly, art.

Those sheep aren’t moving because they’re made of flat, poly-chromed steel, droll heralds of a very different Napa Valley attraction (and one you should see before heading north to the more familiar tourist-oriented Napa). The di Rosa preserve is an astonishingly rich sensory experience and a journey through a vibrant Bay Area art scene from the 1950s to the present. This mother lode of painting, sculpture, drawings, photographs, and installations will, quite simply, stun you — and, if it doesn’t, you need life support. 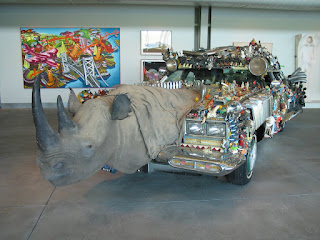 The di Rosa, reason enough to wind your way north from the Golden Gate, is probably the largest collection of significant regional art in the country, featuring work by every artist you should know about from the Bay Area – William T. Wiley, Roy De Forest, Deborah Butterfield, Paul Kos, Robert Arneson, Manuel Neri, Joan Brown and many, many others. If you don’t know about them, don’t sweat it: part of the charm of di Rosa is its movable feast of discovery.

The provenance of the preserve itself is also interesting. Rene di Rosa was a Yale graduate who came west in the ‘50s, worked for the San Francisco Chronicle, knew all those Beats we’ve heard about and most everybody else, quit his job – that’s what you did in the ’60s — and moved to Carneros to write a novel. But he was more smitten by the art all around him than anything else, and he had both the presence of mind, and some financial wherewithal, to collect it.

He was also generous of spirit, and encouraged young artists at the center of a tempestuous and still resonant time. Among the work on display is a toy-encrusted “Rhinocar,” by David Best, a vintage Oldsmobile with a rhinoceros head for a grill. No child can resist it. And right next to it is the current show, new work by the painter Hung Liu, vibrant, laminated oils of Chinese subjects.

The long historical throw of the di Rosa is apparent in several wonderful gallery spaces, but any sensible visitor will want to take the jitney tour — kids go free — which will take you through the grounds and the peacock-patrolled house where di Rosa lived with Veronica, his wife, a water colorist and sculptor who created the steel sheep that greet you upon arrival. 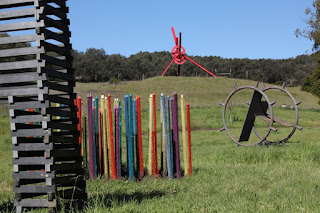 Di Rosa was an environmentalist before that term had cache and, with money acquired from selling off vineyards, constructed the preserve, complete with a 35-acre lake enhanced by a palm-treed island, and a vast sculpture garden that leads you past “Poetry House 4” by Alan Shepp, “Cactus Garden” by Gordon Huether, “Roller” by William Warenham, and “For Veronica” by Mark di Suvero, which catches the afternoon light, yet another luminous reminder that there’s more to Napa than wine.

conawayjim@gmail.com
Posted by Jim Conaway at 7:07 AM